Find a bar stool and have a seat as we discuss some history and facts about bar mirrors.

Scientists believe mirrors have been around for nearly 8000 years.  First in the form of ground and polished volcanic rock, then several thousand years later, as polished metals such as copper and bronze.  It is not believed, however, that they were widely used.  Most likely reserved for the elite or upper class.

Modern mirrors as we know them today were not invented until nearly 200 years ago when a German chemist developed a technique of applying a thin layer of metallic silver to one side of a pane of glass.  Mass production of these new mirrors soon followed.

How long ago bar owners started placing these new mirrors behind their bar is not clear.  However, some scholars believe they gained popularity as America expanded out west, and soon became a standard feature in most bars.  As both bartenders and patrons found them appealing and useful.

Part of a bartenders job is to keep an eye on everything going on in their bar.  Who needs another drink, who needs cut off, any people entering or leaving, someone ready to cash out or about to dash out, and any number of other activities that require attention.  Sometimes, however, they need to turn their back to the room, and that is when the mirror becomes most useful to them.

Whether it is to grab a bottle, use the cash register, or anything else, the bartender can use the mirror to watch what’s going on while their back is turned.  During the days of the wild west, it could have prevented them from being ambushed and robbed.  While today it could help them protect their patrons from other people tampering with their drinks or being harassed.

There is a limitless number of reasons why people go to bars it seems.  To meet a friend, be alone, make memories, take their mind off the day, and so on.  Whatever reason it is, when they take a seat on a bar stool and ask for a drink, chances are there will be a mirror in front of them, and knowingly or unknowingly it will most likely play a role in their overall experience.

Someone may check out their reflection in the mirror right before talking to a cute stranger, or if they don’t have the nerve to talk, they might just use the mirror to catch glimpses of them without being obvious.  They could use it to keep tabs on the bartender, see who’s walking in, who’s leaving, get a better look at the liquor selection, or even watch the game on the TV behind them.

Bar owners and alcohol-related businesses may have always known that the back bar area was great real estate for advertising, but once the mirror was introduced into that space it became even more desired.  What better place to put your brand then where everyone’s eyes are already drawn. 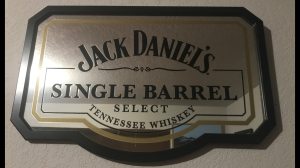 Bar mirror advertising is still very popular today, and some vintage mirrors have become highly collectible.  As technology advances so do the look and appeal of these mirrors.  In fact, a growing number of people have a bar mirror hanging in their own homes.  Whether it be behind their bar in the basement, in their garage, or even as regular decor around the house, bar mirrors have become much more than just a piece of reflective glass hanging behind your local bar.

On that note, I think I’ll close my tab.  See you next week.  Thanks for reading!