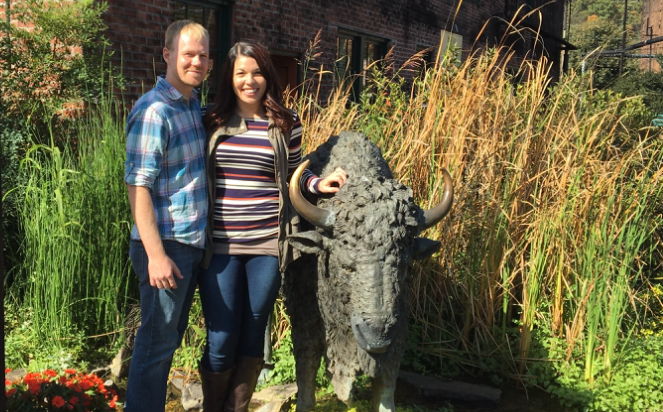 My wife and I at Buffalo Trace Distillery

Valentine’s Day is Wednesday, get your wife anything yet?  No? Good, have a seat, I’ll tell you why you shouldn’t.  Trust me, after she hears this, she’ll understand.

Most people already know what Valentine’s Day is.  It’s a day to show your significant other how much you care about them by showering him or her with cliché gifts and tacky cards, but how many people know the story of its origins.  Why is it on February 14th, and how did it become what it is today?

Apparently, young, ancient Roman women, from February 13th to the 15th, would line up and allow drunk, naked men to hit on them, literally.  The men would whip them with the hides of recently sacrificed goats and dogs.  It was believed that being whipped would make them more fertile.  You really can’t make this stuff up.  This event was referred to as the feast of Lupercalia.

Coincidently, during the 3rd century AD, two men, both named Valentine, were executed, on February 14th, in different years.  The Catholic church at some point dubbed the day St. Valentine’s Day, and during the 5th century combined the two notable events in hopes of eliminating Lupercalia’s pagan-like rituals.  They managed to get the men to keep their clothes on, but it still remained a day of drunken romance.  You may at this point be wondering, how is any of this bar related?  Well presumably, the participants of the ancient version of Valentine’s Day were single and looking for love.  Whether it be long-term, or just for the night.

If you look past the naked men sacrificing goats and dogs, whipping women with the animal hides, and the two executions, it’s pretty obvious what was really happening.  Young single men and women were seeking companionship.  Judging by the procedures, it’s safe to guess that men were most likely the organizers.  Nonetheless, the desired outcomes were not so different from modern-day Valentine’s Day.  In fact, a growing number of people have started referring to it by a most suitable name, Single’s Awareness Day or SAD.

This day should be a day to celebrate the “single” relationship status.  In the spirit of singularity, there should be wheelbarrow and unicycle parades in every town and city.  Ending with the most eligible bachelors and bachelorettes being escorted by 5th wheel haulers.  Internet dating should be forgotten for the night and all bars and restaurants should offer single’s only specials.  Every bar in America should be full of single people celebrating and meeting each other.  Uber and Lift cars should offer discounts for anyone not wearing a wedding ring.  Everyone should honor this day’s heritage and leave married people out of the picture.

As for all of us married folk, it should be our responsibility, no our duty, to make this day only about the single people we care about in our lives.  Instead of spending $100+ on a bunch of dead flowers for your wife, offer to pay for a nice haircut for a buddy.  Instead of buying expensive chocolates, buy a day at the spa for your single sister.   We should stop spending money on overpriced Hallmark cards and buy a single friend some lottery tickets to help improve their chances of getting lucky.  This day originated to help single people find one another, so let’s get back to our roots and make it about that once again.

On that note, I’ll leave you here with all the single ladies and close my tab.  Happy Single’s Awareness Day, good luck, and see you next week.

One thought on “Valentine’s Day”