Did you know today is Presidents’ Day?  Pull up a bar stool and I’ll tell you what I know.

This holiday was originally set on George Washington’s birthday, February 22, and is to this day still recognized by the federal government as “Washington’s Birthday,” not President’s Day.  In the 1970’s, lawmakers adjusted the date to fall on the third Monday of every February.  They tried to change the official name as well but failed.  Nevertheless, “Washington’s Birthday” lost traction over time in some states and it’s unofficial name, President’s Day, gained popularity.  Fortunately for us, we now get to enjoy huge President’s Day sales on mattresses and furniture!  Speaking of furniture, a President walks into a bar, does he prefer the bar, a table, or a booth?

As it turns out, unless the President is on the campaign trail, a visit to a bar by them is a chance to escape and unwind, and not necessarily to socialize. So they have a tendency to gravitate to a more private booth.  The bar can be too crowded, easy to draw unwanted attention, and is probably on secret services’ list of no no’s.  A table against a wall could probably work, but it doesn’t quite give the same sense of security a booth does.  Besides, there are only two reasons to sit at a table in a bar.  You’re with a large group of people, or there is nowhere else to sit.  In a booth, you have your back against something sturdy, it’s often more comfortable, and it allows the privacy of only being seen and not heard.

There are a few bars in the Washington D.C. area that are well-known watering holes for thirsty leaders of the free world.  These places rightfully feel privileged for the honor, but also understand that a level of discreetness comes with such high profile visitors.  As we move farther away, like New York or Virginia, bars tend to celebrate these visits more openly.  They call themselves “The President’s Choice”, or turn visited booths into shrines.  There are two bars, in fact, that claim to own the booth that John F. Kennedy proposed to Jackie, and they’re over 400 miles apart from each other.  It is also said that he proposed to her via a telegram.  I think everyone can agree what was really going on, right?  He did propose at both places, after the telegram, in an attempt to get a couple free meals paid for by the house.

As tempting as it may be for a restaurant owner, bar owner, or a fellow patron to offer to pick up the tab for a visiting President, it is simply not allowed or at least not accepted. 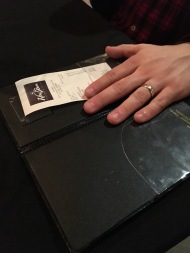 Though it’s difficult to find anything specifically stating that a free or paid for dinner isn’t allowed, it is pretty well acknowledged by everyone that buying the President a meal or drinks fits under the category of a gift.  Accepting gifts from anyone is illegal under the Code of Ethics Law.  The law is designed to prevent bribing or any negative influence in decision making by our nation’s leaders, but apparently, it has a few flaws.  Don’t worry, we’re not going to get into that.  For now, all that is important to know is that for any reason you are fortunate enough to get to share a booth at the bar with any president in your lifetime, he or she will not stick you with their bill.

With that good news, I’d like to wish you a happy Washington’s Birthday and see you next week.