Do you know what you’re drinking?  While you decide, pull up a bar stool and I’ll pour a little knowledge on you about beer tap handles.

Anyone who enjoys drinking draft beer is likely familiar with tap handles.  They can often be viewed towering behind the bar displaying the beverage they serve, usually decorated with bright colors and catchy designs.  However, the handle itself plays only a small role in a larger, sometimes complicated, draft system.  It merely opens and closes a valve that starts and stops the flow of your favorite cold one.

The valve, controlled by the tap handle, is located inside the faucet.  Falling from the faucet is the last step in your drinks journey to your glass.  Before it gets to that, it must flow through some tubing, often made of vinyl or polyethylene.  If the tube travels any significant length, it is sometimes chilled to prevent its content from getting warm while waiting to be

served.  Follow the tube back, and you’ll come to the coupling.  This connects the tube to the source, usually a keg.  The coupling is also where a gas line is connected.  The gas is used to push the liquid out of the keg and through the tube.  Bars and restaurants pump pure, regulated, carbon dioxide and nitrogen to keep the contents consistent and fresh, while the backyard keg in an ice bucket gets inconsistent amounts of hand-pumped oxygen and whatever else is in the air around it.  That’s why those kegs should be finished or at least not used more than a day, to prevent drinking flat or spoiled beer.  Finally, to keep your beer tasting its best, and not spoiling, it must remain chilled while it waits in the keg.  An ice bucket works on a small-scale, but most beer serving establishments have a large walk-in cooler full of kegs, kept at their optimum temperature.

Today it’s easy to find a new beer or flavor to sip on at the bar since America has undergone a substantial growth in breweries and microbreweries over the last 20 years or so.  As these new companies gain experience and perfect their technics, they can find themselves faced with the dilemma of making their product stand out in an ever-growing field of competition.  Since brewers can’t always be out in the trenches pushing and selling their signature ale or latest seasonal release, and bartenders rarely have time to describe everything on tap to the consumer, most have turned to the tap handle to help show off their brand. 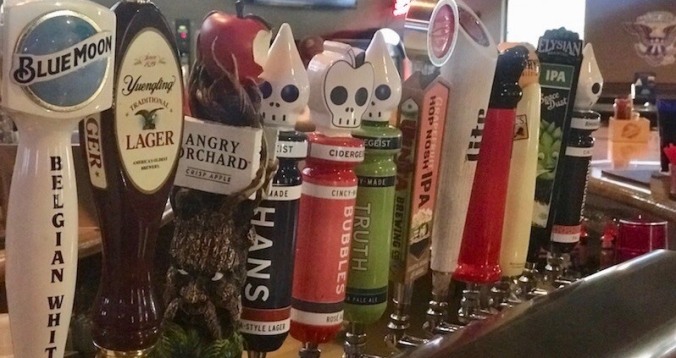 While major beer manufacturers, who already have a foothold in the industry, can get away with a simple tap handle featuring basic shapes and just their name on it, the little guys trying to be known can’t afford to just blend in.  Their main objective in designing their tap handles is to grab the customers attention, force him or her to ask about it, and ultimately drink their beer.  It’s safe to say that most brewing companies believe that if they can just get people to try their drinks, that they’ll love it and want to buy more.  That’s why you’ll find tap handles with bright smiling skulls, half-naked women, snarling predators, or even a tornado, you name it.  All with the intent to grab the eyes of the beer holders, and stand out from the competition.  Turning what was originally just a small handle that simply opened and closed a valve that released your drink of choice, into a largely invested piece of marketing artwork, designed to influence us, the consumer, into trying something new.

Good luck choosing, I’m gonna close my tab now.  If you’d like to know what a bar has on tap ahead of time, you should try this new app called taphunter.  Here’s the link, https://www.taphunter.com/.  See you next week!